To Mexico before Key West

Yes, we ended up in Mexico first, rather than straight to Key West as planned. It's a long story, so bear with me.
We headed from Caye Caulker, via ferry, and did our checkout in San Pedro. To go with Fortuitous we would have had to head out through a difficult pass in the reef, so we opted to check out of Belize this way. 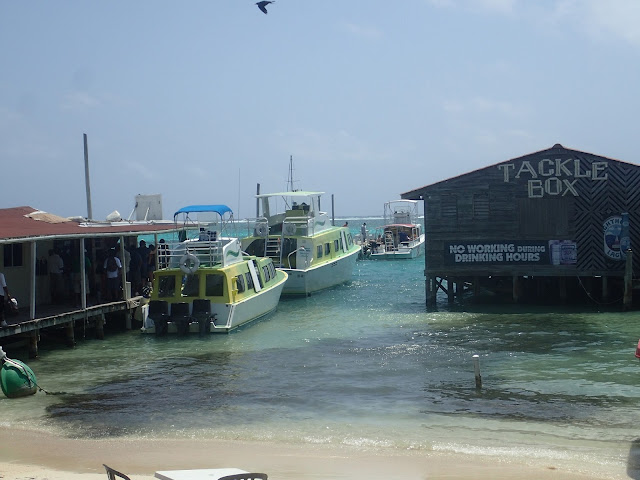 These are the local ferries to San Pedro and Belize City. 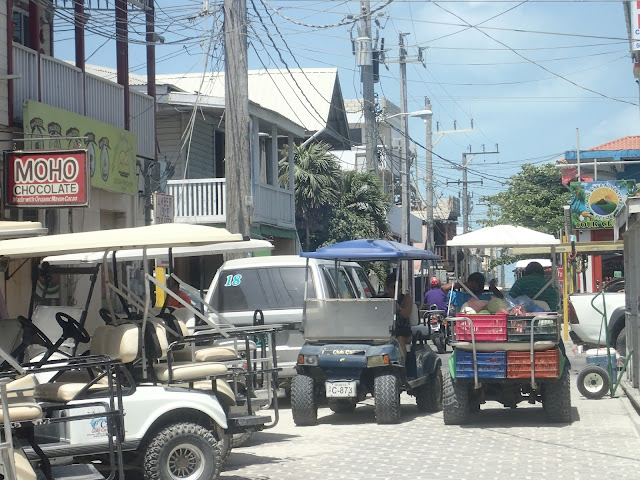 Caye Caulker and San Pedro are both FULL of golf carts. One would think that would be less dangerous than cars, but not so much.

We were set to go the next day. Chris Parker gave us a thumbs up to head to Key West and so we were going for it. I (Cheryl) was still feeling quite under the weather with a sinus infection and found it impossible to go on to Key West. We had two terribly uncomfortable nights enroute now to Cozumel. The first night, a small sailboat (that didn't show up on radar at all) was approaching quickly across our bow, from the port side. It, of course, was my watch and I could see a green light, but it was low and kind of blended in with the shore lights. By the time we realized it was a boat, we just had time to put on the motor and turn to starboard. Thankfully, he finally must have seen us and also turned to starboard! When we passed we must have been 20' apart! We had the right of way, but you can still be 'dead' right! The second day and night, I was so sick that Ralph did pretty much all the day and night watch. We arrived in Cozumel at about 3am on the 31st. We were under sail the whole way and doing about 7 kts with the current. When we went to turn into the anchorage, in the dark, our motor wouldn't start. After SOME panic...especially from me since we were still drifting at 5 kts past the anchorage, we found the kill switch wasn't pushed all the way in...managed to get anchored by 5am and had a couple hours sleep before having to check into Mexico. Of course, we had a zarpe for Key West, but there didn't appear to be any problems...still took us all day and, with me still sick, it wasn't much fun. We stayed 2 nights and then moved on to the El Cid Marina, Puerto Morelos since more bad weather was heading our way. 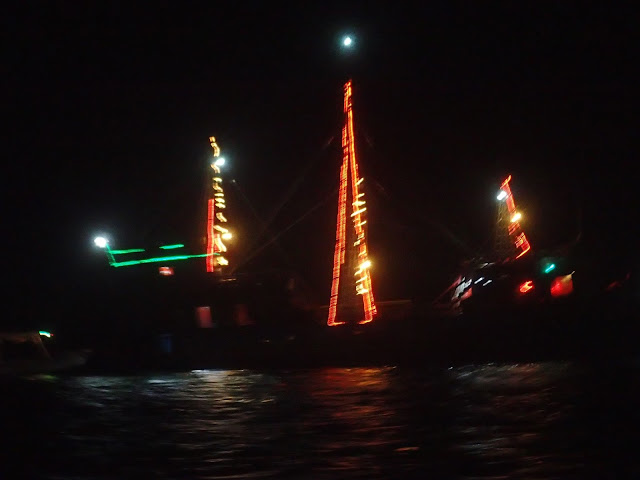 We have no real photos of Cozumel, so I guess we'll have to go back. It was a terrible place, from a cruiser's point of view, since there was no dinghy dock and you had to land on rocks at the beach and drag up the dinghy and, hopefully, chain it to a palm tree. We went in a seldom as possible because of this. There were lots of tourist cruises and this boat was all lit up at night...too bad, a little blurry photo. 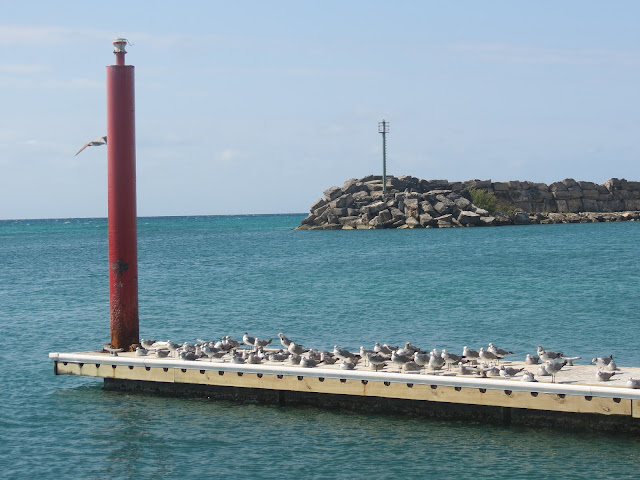 El Cid Marina resort was a very nice place. However, the birds and what they leave behind were a pain! Again, I was still sick so went to see the resort doctor who gave me 2 antibiotic shots and some cipro to cure what ails me. 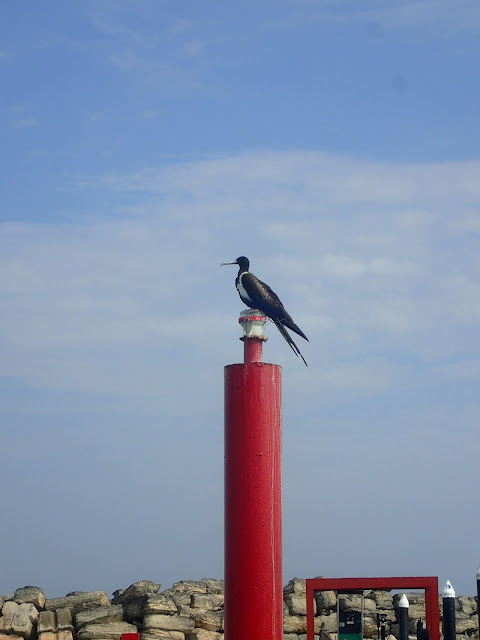 No end of birds! This one's a frigate. 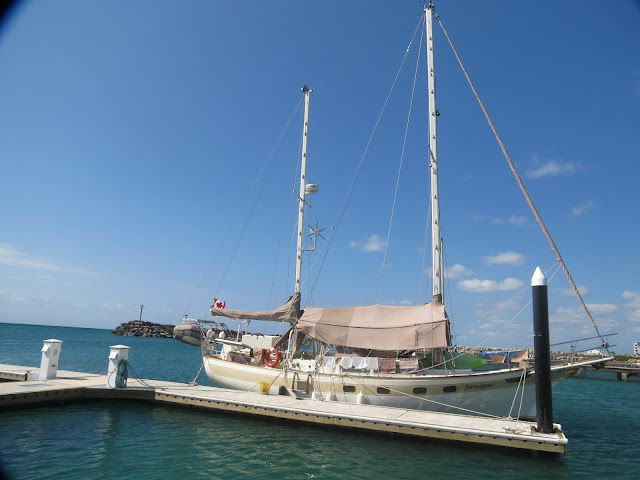 Here we are tied to the dock awaiting weather to head out to Key West. We arrived April 2nd and headed back out, enroute to Key West, April 6th. 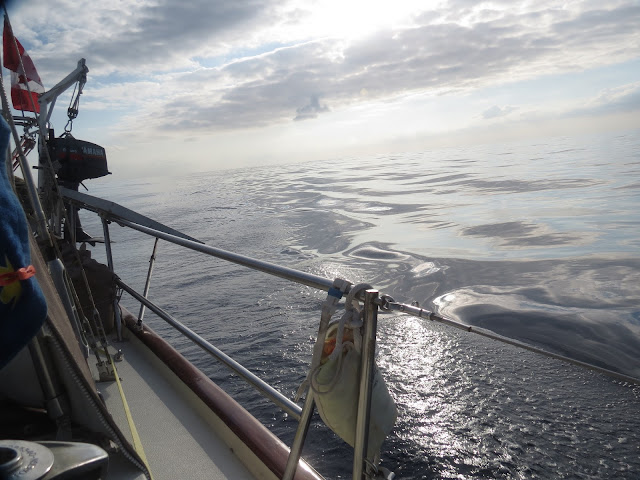 It was a motorboat ride, but unbelievably calm, as you can see. 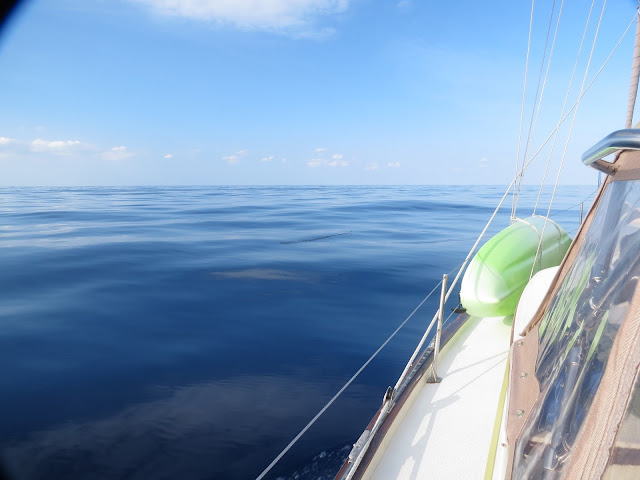 It reminded us very much of our trip down the Washington/Oregon coast in 2004. Glassy waters. 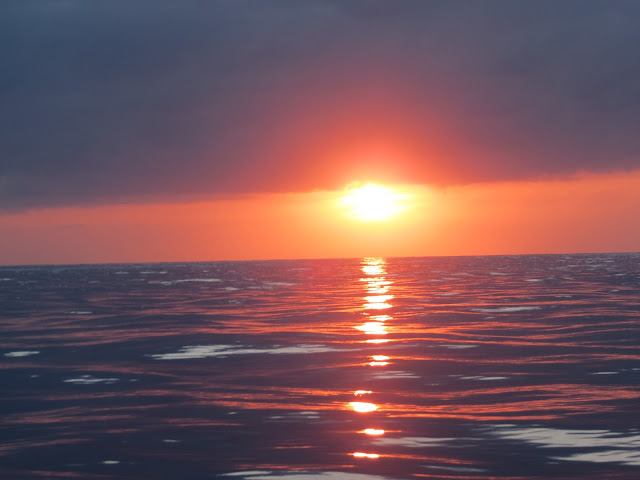 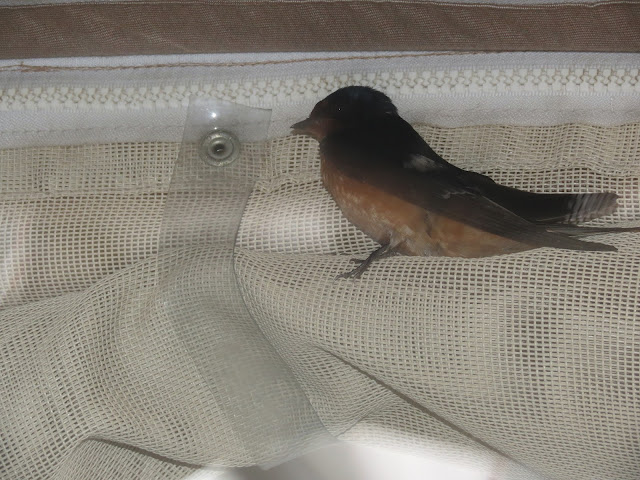 The only problem we had was we kept being invaded by land birds. We have no idea where they came from as we were a long way out, but they were tired and needed to rest. 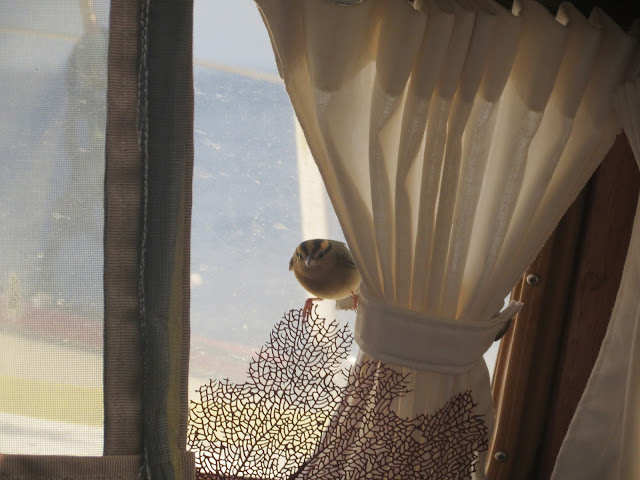 Unfortunately, they weren't content to stay outside, and headed into the cabin. This one is perched above our settee...we didn't let him stay long! As you can see, several different types came and went. We finally had to screen up the cockpit to keep them out, and one or two still came in the hatches and we had to chase them out from below. 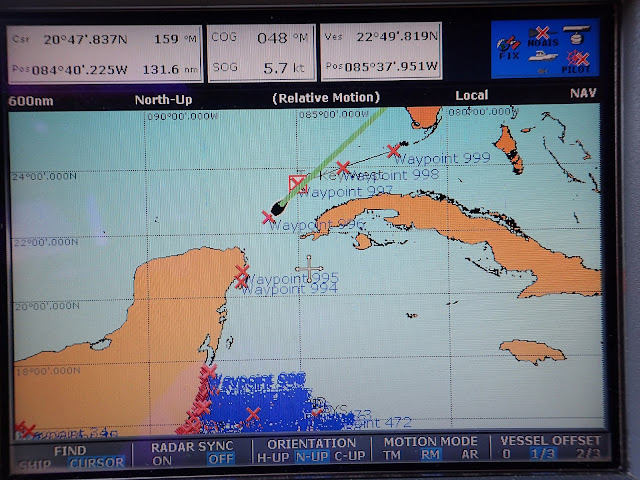 This is our chart plotter and our route to Key West from Mexico. 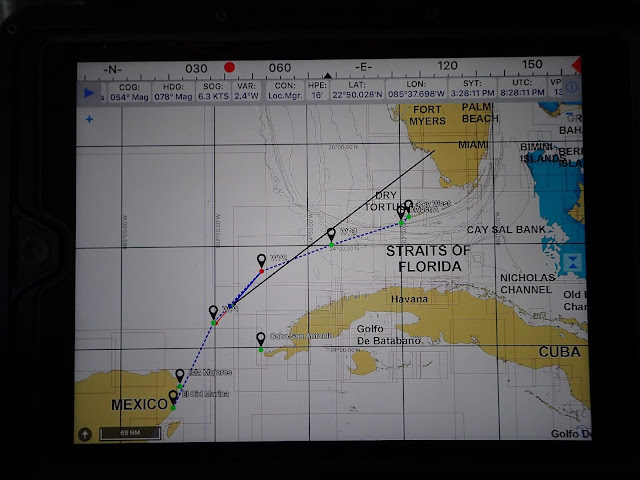 Sure nice to have these modern navigational aides. 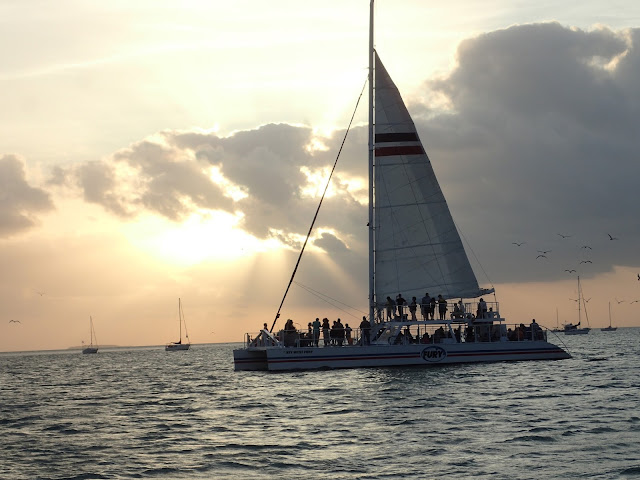 Key West is a tourist haven and there is no end of sunset and day cruises for them to enjoy. Most of the boats came past us nightly loaded to the gunnels. 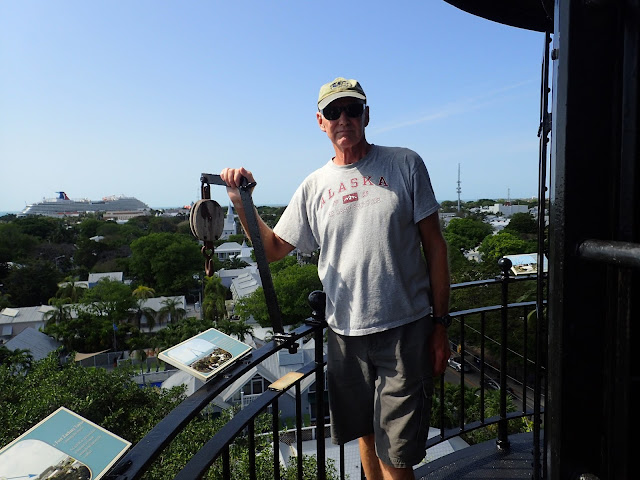 The lighthouse in Key West. A good view of a pretty little town. 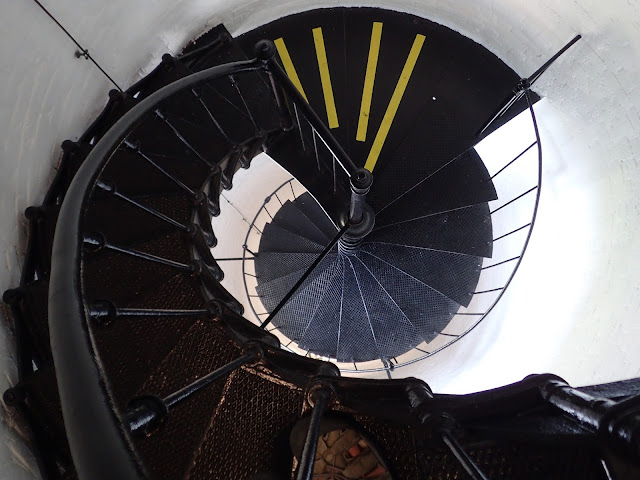 I get dizzy just looking at this photo, never mind climbing up and down the 86 steps. 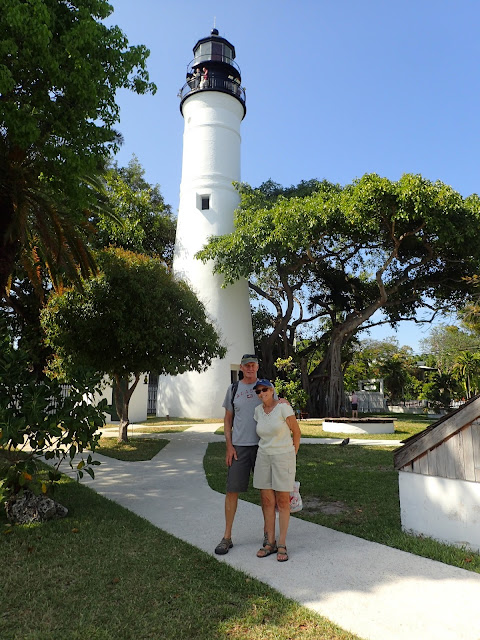 We thoroughly enjoyed Key West and walked about 7 miles that day! 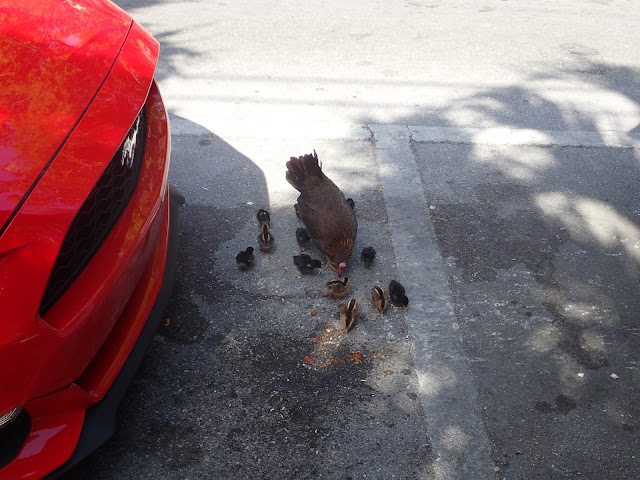 Chickens and roosters are everywhere in town. We never really got to the bottom of why because some said they were protected others said no. It appears that they are all over the Keys because they're also in Marathon. 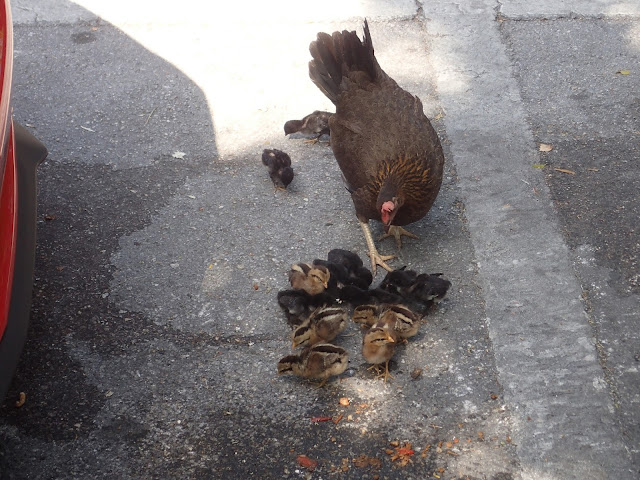 Someone told us that there's a fine if you run over one...really?? 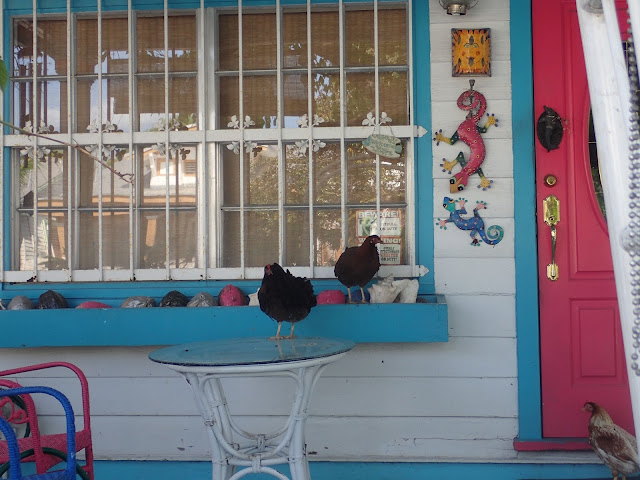 Someone's front yard, but probably not that person's chickens! 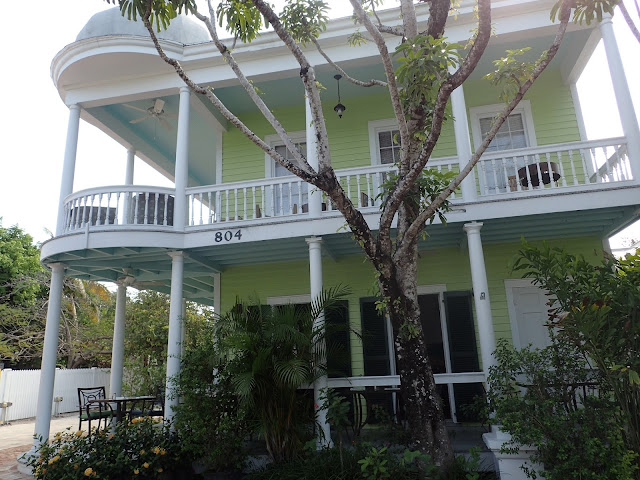 Lovely old houses and most well preserved. Even the Denny's was an old-style diner. 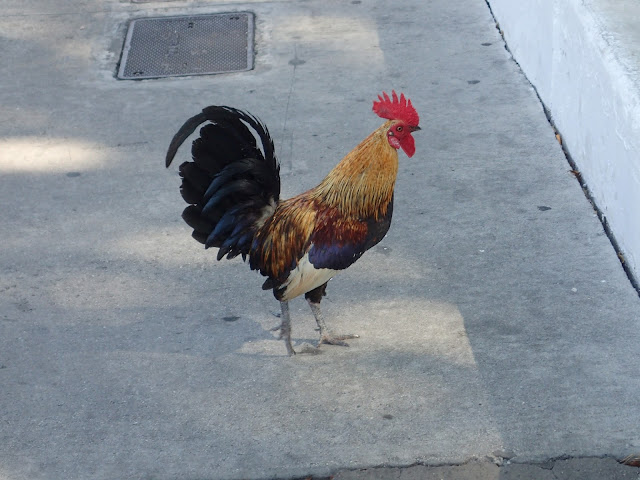 I'm guessing he's the reason there are more and more chickens! 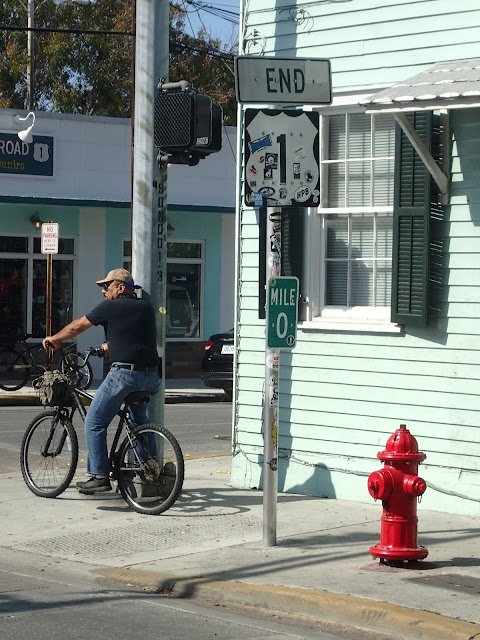 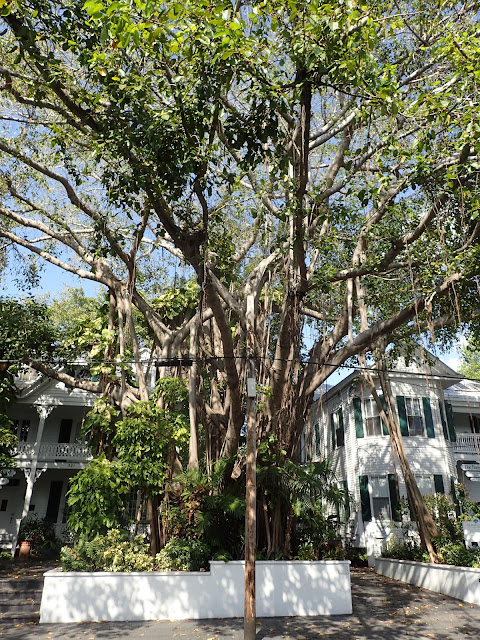 A banyan tree in front of some houses. Lovely vegetation and flowers. Very tropical but not nearly as hot as Guatemala, Belize or Mexico. Onward to Marathon in the middle of the Keys, then eventually around Miami and into the intra-coastal waterway around Ft. Lauderdale...at least that's the plan for now.
Posted by Cheryl and Ralph at 10:51 No comments:

HOW TO USE THIS BLOG

Cheryl and Ralph
We began our journey in August 2004. This blog is about that journey and the bumps and detours along the way. We postponed our dream Dec. 2005, went to Tennessee then Atlanta for work for a year. We returned to Mexico, splashed Fortuitous, and readied her to head to Central America. We travelled through Central America and realizing that dream, then headed through the Panama Canal, into the San Blas Islands, and on to Cartagena. In Cartagena, Fortuitous had a major facelift with new gelcoat, headliner, elimination of the cockpit entrance to the aft cabin, lots of varnish, and more.